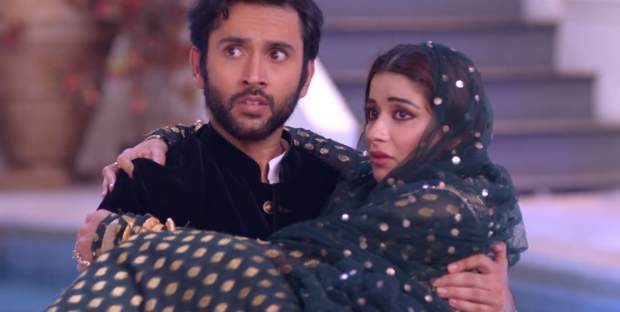 The Divya Drishti 3 Nov episode begins with Rakshit and Shikhar coming back in the play area. Patali is still disguised as Divya and tries to get near Shikhar.

Shikhar is stunned to see everyone performing magic. He sees Divya in a bag over the swimming pool. Drishti saves Divya from Patali while Shikhar gets into the pool to catch her.

Pishachini accuses Shikhar of being fake and stealing money from Shergills. Divya also gets suspicious and wants him to show his bag.

His bag doesn’t contain anything but cotton. The jewelry comes out of Pishachini’s clothes. Shikhar is faster than Pishachini and hid the jewelry in her clothes.

Rakshit is not happy with Drishti trusting Pishachini. He fights with her while Shikhar is confused about them using magic. Divya tries to explain the family tree to Shikhar while Shikhar acts confused and leaves.

Pishachini finds Shikhar doing something in the garden and sees 401 written on his weapon. She gets suspicious of him being the prisoner who escaped from hell.

Drishti and Rakshit fight and share some heated moments. Meanwhile, Pishachini and Patali try to find a 401 mark on Shikhar’s body.

Drishti and Rakshit try to prove who is more powerful by using Romi. Later, Divya beats Shikhar and Pishachini sees a 401 mark on Shikhar’s body.

In the morning, Pishachini makes him see a dream of Kaal Devta and asks him to work for her.

The written episode of Divya Drishti upcoming update: Pishachini uses Shikhar in bringing Divya in a secluded place to kill her.

© Copyright serialsindia.com, 2018, 2019, 2020. All Rights Reserved. Unauthorized use and/or duplication of this material without written permission from serialsindia.com is strictly prohibited.
Cached Saved on: Sunday 5th of February 2023 03:12:28 AM