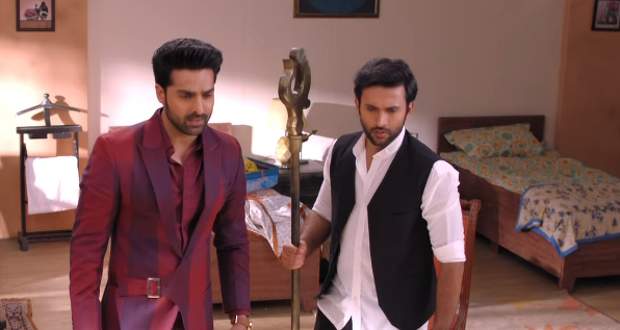 The Divya Drishti 30 Nov episode begins with Divya packing the first aid box as a thank you for Shikhar. She gives the box to Shikhar while Drishti hears Pishachini crying in a room with a terrible wound on her arm.

The same wound is seen by Divya on Shikhar’s body. Later, Drishti sees a vision wherein she is followed by a set of bikers.

Shikhar gets shocked to learn that his birthday comes on the same day as real Shikhar. Pishachini talks to someone in a village while Mahima reveals their ancient Haveli is in danger.

Rakshit says only he will go along with Shikhar but Divya and Drishti also put some logics and decide to tag along. The same people from Drishti’s vision are seen riding the bikes.

The Shergills arrive at the village and meet the people living there. They discuss the threat they have on their lives due to some bikers.

The bikers arrive and Divya, Drishti, and Rakshit use their powers to stop them. They return while later Shikhar and Rakshit tell the same story from their childhood.

They later see some earthen pots and many other superstitions persisting in the village. Shikhar again feels weird about remembering so much common about their childhood in the village.

Rakshit and Shikhar see a shocking clip from 20 years ago in their camera. They see the same people in the same clothes  20 years ago as they saw on the very same day.

The written episode of Divya Drishti upcoming update: Rakshit and Shikhar are tied to a tree by villagers who try to kill them.

© Copyright serialsindia.com, 2018, 2019, 2020. All Rights Reserved. Unauthorized use and/or duplication of this material without written permission from serialsindia.com is strictly prohibited.
Cached Saved on: Wednesday 30th of November 2022 06:29:40 AM