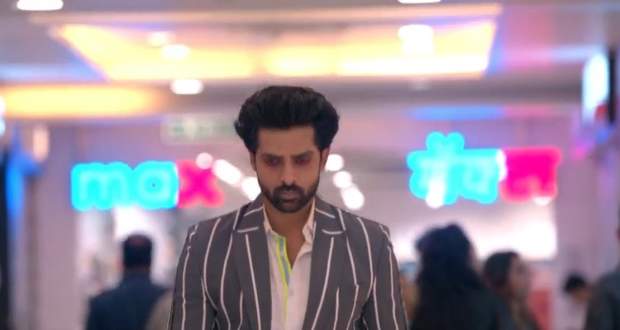 The Divya Drishti 28 Sep episode begins with Pishachini forcing all the family members to accompany her to the mall.

Rakshit raises his hand on Romi when he refuses to come to the mall. He forces Romi to follow Pishachini’s instructions.

Divya and Drishti see a strange same mark on their hand. Divya gets panicky ad behaves strangely. She even avoids Drishti.

All the family members come to the mall along with Pishachini. Romi bumps into Rakshit and comes near to him. Rakshit gets angry at Romi and throttles him.

Romi manages to escape from Rakshit’s trap. Rakshit runs after him.

Pishachini shows her happiness on seeing small school kids in the mall. Drishti gets doubtful about her and decides to spy on her.

Romi approaches Divya and takes her along to see Rakshit’s strange behavior. Mahima and Chetan come to Rakshit when they find him alone.

Mahima approaches Rakshit while Chetan tries to stop him when he walks away. Rakshit bites Chetan and spreads his infection to him.

Divya uses her powers to stop Rakshit. Romi helps her. Drishti hears Mahima’s cries and rushes towards her.

Chetan also turns into a zombie with Rakshit’s bite. He attacks other family members and people in the mall. Divya and Romi tie Rakshit in a separate room.

Pishachini uses her powers on kids to make them turn into dolls. Divya gets shocked to see Rakshit’s angry avatar.

The cops come to the mall and target the zombies. They point their gun towards Rakshit. Mahima and Drishti stop them from firing.

Drishti and Divya take swords in their hands and enter a fight. They attack Raingini and kill her. All the people get normal after Raingini’s death.

Pishachini brings all the dolls to the Shergill house. Drishti hears the noise of kids crying around Rakshit’s room.

© Copyright serialsindia.com, 2018, 2019, 2020. All Rights Reserved. Unauthorized use and/or duplication of this material without written permission from serialsindia.com is strictly prohibited.
Cached Saved on: Friday 19th of August 2022 03:51:08 AM