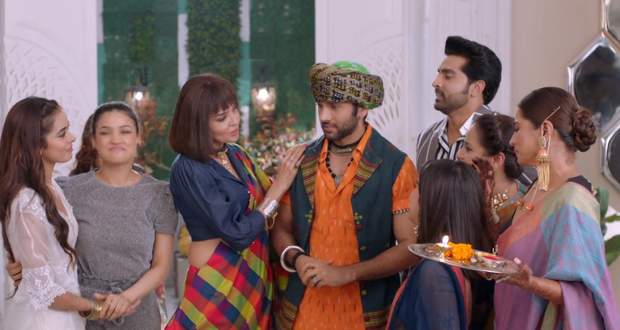 The Divya Drishti 26 Oct episode begins with Pishachini getting delighted that Divya and Drishti lost the bet. However, Pishachini and Patali have also failed to win the challenge.

They leave and Divya and Drishti celebrate their birthday. Divya again sees the same man in her vision while Rakshit finds Shikhar.

Pishachini learns from a newspaper from hell that prisoner number 401 has escaped. Meanwhile, Divya sees the same man again and can his face too. He hugs her and Divya feels weird.

Divya gets shocked to see the same man in the village whose name is Murari. Later, Shergills find out that Murari is Shikhar who was lost years ago.

Murari comes to Shergill house while Pishachini wonders why everyone is celebrating. Murari tries to fit in the modern lifestyle while Divya doesn’t feel comfortable around him.

She later tells Drishti about the man she sees in her vision who looks exactly like Murari. At the same time, Murari reveals he is prisoner number 401 and has come to steal everything from Shergills.

He also decides to use Divya in his mission and also finds a map of the Shergill house. Patali comes into his room and learns the family has brought him as Shikhar.

Later, Divya gets scared to see Murari with a knife in the kitchen.

The written episode of Divya Drishti upcoming update: Pishachini says he can’t be Shikhar while Murari creates a Romeo-Juliet drama to distract the housemates.

© Copyright serialsindia.com, 2018, 2019, 2020. All Rights Reserved. Unauthorized use and/or duplication of this material without written permission from serialsindia.com is strictly prohibited.
Cached Saved on: Wednesday 1st of February 2023 09:41:12 PM