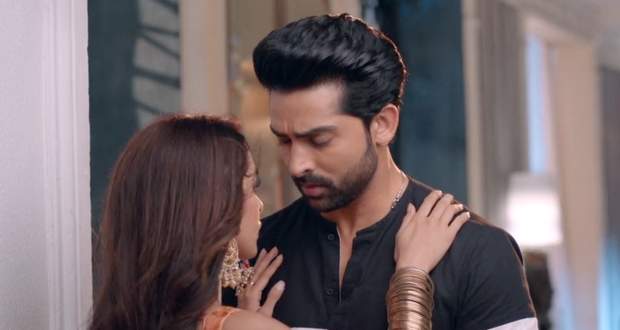 The Divya Drishti 22 Sep episode begins with Drishti and  Pishachini fighting for each other's right on Rakshit.

Divya traps Raingini in a bottle but Raingini escapes by biting the bottle lid.

Drishti disguises as Pishachini to save Rakshit from Pishachini.

Divya tries to stop Pishachini but Pischachni stops her attempt.

Raingini tries to prove about Pishachini's new avatar to both Kaal Dev and Pishachini.

Drishti tries multiple attempts to make Rakshit recollect his past but everything fails.

Meanwhile, in the dining table, Pishachini eats non-veg which is not allowed on Mondays which makes everyone leaves the table without eating.

Now, Drishti and Drishti get to see a new vision of a mark in someone’s hand.

Drishti knows that it is Rakshit’s hand but she doesn’t want to tell that to Divya.

The written episode of Divya Drishti upcoming update: Pischachini takes everyone for shopping with a new plan.

© Copyright serialsindia.com, 2018, 2019, 2020. All Rights Reserved. Unauthorized use and/or duplication of this material without written permission from serialsindia.com is strictly prohibited.
Cached Saved on: Wednesday 1st of February 2023 06:13:56 PM