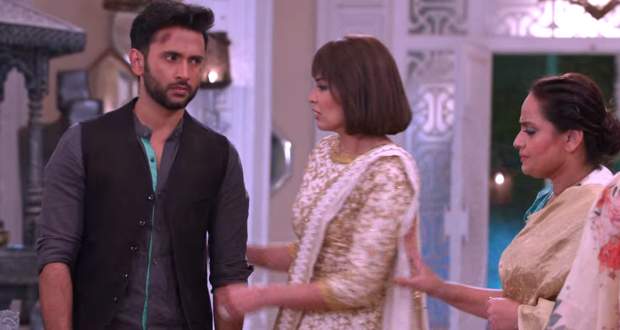 The Divya Drishti 22 Dec episode begins with Drishti getting attacked by one of the tribe members. He says they have to sacrifice her and that no women are allowed to talk.

Drishti shows the power of a woman by using her powers. She opens the ropes of Rakshit and they run to save themselves. Shikhar also gets surrounded by tribal people.

Chicky arrives at a Kaleen to save Drishti and Rakshit. Divya discovers that the fourth handprint glows with Shikhar’s hand on the cave.

Chicky is injured and they all bring her home. Later, Drishti and Rakshit try to find any information about Lal Chakor and the Lal Chakor symbol is shown on Chicky.

Shikhar tries to explain himself and wants everyone to believe that he is Shikhar. He also tells various memories from childhood and accuses Pishachini of putting him in hell.

Pishachini puts blame on Shikhar while Rakshit decides to reveal Shikhar’s identity by using an ancient knife. Pishachini uses her prove Shikhar is not real.

They decide to vote as a knife test doesn’t work. Divya votes for Shikhar and he is allowed to stay at him. She tells Drishti about the hand mark of Shikhar matching on the cave.

Chicky is there to carry out a mission and is sent by Lal Chakor. Her mark glows and a red bird emerges from her mark.

The written episode of Divya Drishti upcoming update: Pishachini is attacked by Lal Chakor while they also find a red feather.

© Copyright serialsindia.com, 2018, 2019, 2020. All Rights Reserved. Unauthorized use and/or duplication of this material without written permission from serialsindia.com is strictly prohibited.
Cached Saved on: Thursday 7th of July 2022 12:40:51 AM