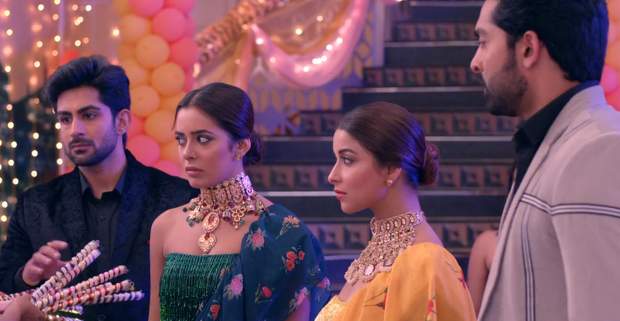 The Divya Drishti 20 Oct episode begins with everybody blaming Ojaswani for helping Pishachini. She explains her part of the story while Drishti and Drishti arrive along with Rakshit and Mahima.

They start riding the bus but Patali is also on top of the same bus. She scares the ladies while later tries to attack Divya and Drishti.

The prisoner in hell escapes using the red stone. Meanwhile, Drishti uses magic on windows to stop Patali from entering the bus.

Patali attacks from the top of the bus while later everyone gets off the bus except Divya, Drishti, and Rakshit who get trapped by Patali.

Patali attacks the other Shergills while they also say they are not scared of her by looking in her eyes. Divya and Drishti also attack Patali and she disappears as soon as the sun comes up.

Everybody reunite and get happy while Divya gets unconscious and sees someone with long hair calling her name. She wakes up at home feeling disturbed.

Mahima and others start preparing for Divya and Drishti’s birthday party while the prisoner again comes in Divya’s dream.

Pishachini makes another plan to kill Divya and Drishti using dandiya sticks. She makes them hot and brings them to their birthday party.

Divya and Drishti receive a surprise birthday and dance party. Later, Pishachini and Patali give them the challenge to win the competition and give them hot sticks.

The sticks burn in their hands but later lose their power because of water.

© Copyright serialsindia.com, 2018, 2019, 2020. All Rights Reserved. Unauthorized use and/or duplication of this material without written permission from serialsindia.com is strictly prohibited.
Cached Saved on: Saturday 26th of November 2022 08:30:46 PM