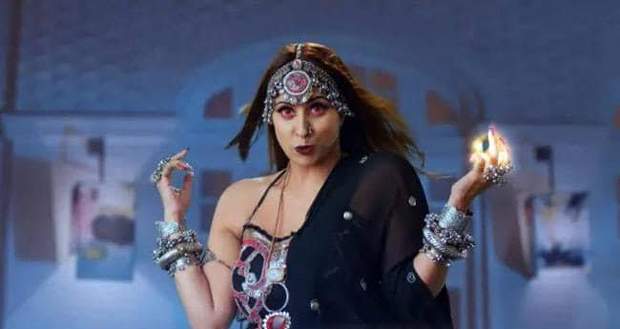 The Divya Drishti 1 Feb episode begins with Sweety running away to save herself. Lal Chakor attacks her then and she dies. Rakshit asks everyone to stoop down, such that Lal Chakor isn't able to attack them. Pishachini supports Lal Chakor to kill Shergills.

Rakshit holds a sword using his magical powers, yet Lal Chakor snatches it away from Rakshit and attacks Ojaswini. Ojaswini too dies on the spot.

Rakshit becomes sorry for not being able to do anything. He expresses words of gratitude for Romi, Divya, Shekhar, and Drishti.

Later, Romi comes to know about Drishti's pregnancy. He thus goes to the kitchen to get something to perform a ritual being a brother, along with Rakhshit.

He hits a box by accident through which DivyaDrishti used to go to the cave. Everyone hears the music of Lal Chakor and wonder if he is coming again.

Divya and Drishti suggest going out of the house by entering into the box. Lal Chakor appears in the human form.

Divya, Drishti, and Rakshit somehow save them from the trap of Lal Chakor. While all of them are going to enter inside the box, Lal Chakor traps Romi from behind.

Pishachini gives Romi the option of either been killed or become a part of her and Lal Chakor's gang. Romi agrees to die for the sake of her sister.

Rakshit along with others reach the Shiv temple. Divya thinks to go back to the house alone and act upon something.

After she reaches there, Pishachini blocks the box, so that none can enter inside or move outside using that box again. Drishti gets worried about a vision wherein Divya is been captured by Lal Chakor and Pishachini.

The written episode of Divya Drishti upcoming update: Divya comes out of the house with the help of Rakshit and Drishti.