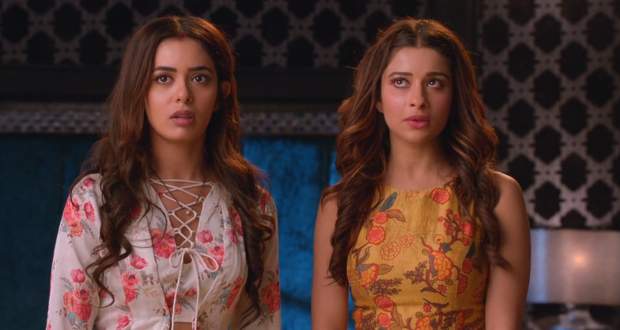 The Divya Drishti 1 Dec episode begins with Divya and Drishti using their message to trap the bikers. Rakshit and Shikhar try to reach Divya and Drishti, to tell the truth, but are interrupted by dead kid Chintu.

Divya and Drishti are also unable to burn their bikes and also see Trishul sign on them. They return to tell Rakshit and Shikhar but flop their plan of convincing villagers.

The villagers try to trap the Shergills and get powerful in the dark. Divya and Drishti escape while the villagers trap Rakshit and Shikhar.

Villagers are about to kill Rakshit and Shikhar when Divya and Drishti arrive on bikes and take all earthen pots. They also take help from the bikers who distract the villagers.

Rakshit, Divya, Drishti, and Shikhar put ashes in the well to get rid of dead people. The villagers disappear and the bikers thank them for their help.

Shergills return home and everybody praises Shikhar for remembering everything and showing his bravery. Drishti sees the same hook mark on Shikhar’s stomach that she earlier saw on Pishachini.

Shikhar wishes to talk to Divya but Drishti interrupts them. She tells her doubts about Shikhar to Divya while Shikhar remembers the words of the exact rhyme recited by Rakshit.

He also remembers a painting behind which he used to hide and also some scenes with Ash and Mahima. Meanwhile, Divya and Drishti learn from Rahasya Tara about solving future problems using information from the past.

Later, Rakshit’s friend Vicky arrives and asks for a party.

The written episode of Divya Drishti upcoming update: Divya finds a diary and she enters the book along with Drishti.

© Copyright serialsindia.com, 2018, 2019, 2020. All Rights Reserved. Unauthorized use and/or duplication of this material without written permission from serialsindia.com is strictly prohibited.
Cached Saved on: Monday 6th of February 2023 05:01:13 AM