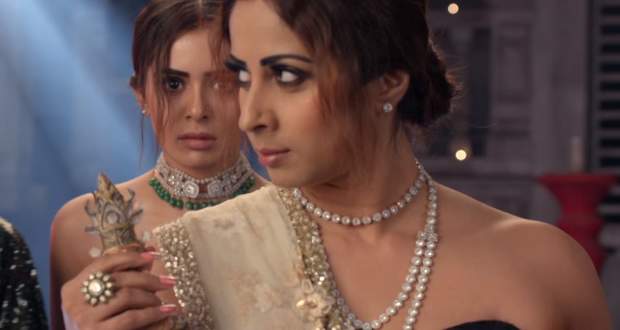 The Divya Drishti 19 Jan episode begins with Drishti hearing the voice of kids calling Mumma. Her saree also starts sparkling and she can feel something inside her.

Divya arrives and shows her the seashell with two pearls. She asks Drishti to do the pregnancy test and it turns out to be positive.

Divya and Drishti get happy and decide to tell the family. Drishti is about to tell when Shikhar interrupts her by singing a song. Ojas Chachi also starts singing.

Divya is asked to sing a song for Shikhar and later Rakshit also sings to show his heartburn to Drishti. Drishti tries to console him by singing a song and is about to tell the good news when Pishachini arrives.

She creates havoc and later builds bricks walls around the house to trap the Shergills. Shergills search for any open window but fail to find one.

Divya and Drishti try to find the real Laal Chakor from Pishachini while Mahima is still mad at them for going into the cave.

Rakshit and Shikhar also try to break the walls using their respective weapons but fail. Simran is attacked by Laal Chakor as she has nail marks on her body.

They get shocked as Laal Chakor was outside while later they find Mahima in an ice block in the kitchen. They deduce Pishachini has not done it as Divya had kept an eye on her. Drishti tells Rakshit that Laal Chakor is inside their house.

The written episode of Divya Drishti upcoming update: Divya and Drishti try to expose Laal Chakor and are suspicious of everyone.

© Copyright serialsindia.com, 2018, 2019, 2020. All Rights Reserved. Unauthorized use and/or duplication of this material without written permission from serialsindia.com is strictly prohibited.
Cached Saved on: Wednesday 1st of February 2023 07:01:35 PM