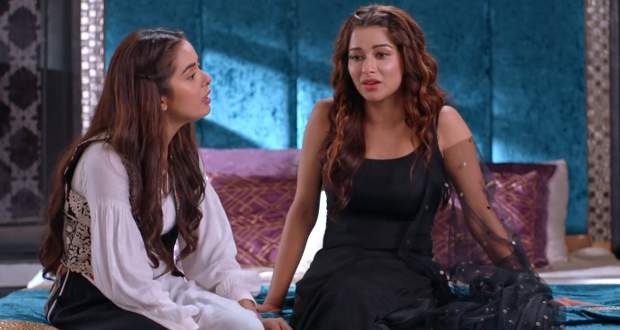 The Divya Drishti 12 Oct episode begins with Rakshit arriving home to meet his family. He gets interrupted by Pishachini and Mahima gets a feeling Rakshit has regained memory.

She instructs something to Drishti and herself leaves to give oil to Pishachini. Meanwhile, Rakshit is about to kill Pishachini when Drishti stops him.

She takes him into another room where Rakshit reunites with his family. Later, Drishti explains how they have to use their brains to fight against Patali.

Pishachini learns from Kaal Devta that the next day is important for Divya and Drishti and their powers will weaken after midnight.

Drishti and Rakshit share some romantic moments near the lake post which Drishti gets unconscious. At the same time, Divya also faints and both recollect the same memory of their mother.

Their mother in their memory says they will get weak on the night of their 25th birthday and their life will be in danger.

Divya and Drishti ask Rakshit to keep Patali and Pishachini busy and also tell Romi to keep an eye on them. Rakshit asks everyone to play a game with Patali.

Romi finds out Patali doesn’t have a heartbeat and tell the same to Divya and Drishti. Drishti fakes an injury and decides to search in Patali’s room for some clue.

Rakshit also does a drama and helps Drishti. Both of them find a secret room where they can hear the sound of a heart beating.

Meanwhile, Patali tortures family members and Pishachini discovers that Rakshit and Drishti are missing. At the same time, Drishti and Rakshit find a lot of guards in the room.

The written episode of Divya Drishti upcoming update: Divya and Drishti decide to destroy Patali’s heart but it enters into Rakshit.

© Copyright serialsindia.com, 2018, 2019, 2020. All Rights Reserved. Unauthorized use and/or duplication of this material without written permission from serialsindia.com is strictly prohibited.
Cached Saved on: Tuesday 24th of May 2022 10:44:47 AM