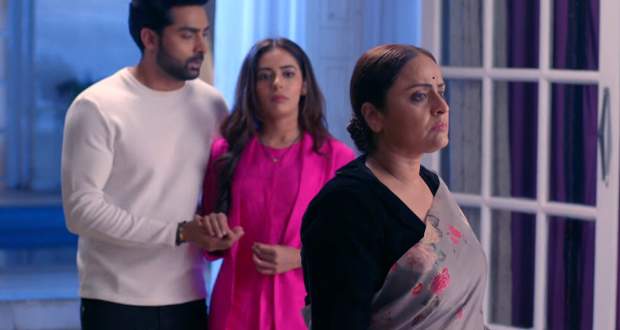 The Divya Drishti 12 Jan episode begins with Drishti and Rakshit warning Shikhar to not block their path. Shikhar refuses to move and meanwhile, Pishachini is desperately waiting for them to arrive.

She plays a musical instrument and calls Laal Chakor. Drishti and others are surrounded by a cyclone and Shikhar go missing. Drishti doesn’t trust him and when they find him, she decides to put his life in danger.

They again reach the gate of the cave while Shikhar doesn’t want them to go. Divya also believes Shikhar and explains to Drishti and Rakshit that it is Pishachini’s trap.

They are about to leave when Divya is attacked by Laal Chakor’s paw. Rakshit saves her while Laal Chakor surrounds them with various paws.

They fight each paw and escape the place. Laal Chakor is mad at Pishachini and wants her to bring Divya and Drishti back in the cave before the night ends.

Later, the family members learn about Divya and Shikhar’s wedding and get happy. They perform wedding rituals while later Mahima is mad at them for returning to the cave.

Drishti gets unconscious and later sees something scary in her vision. She again falls on the floor and the family members think she might be pregnant.

Rakshit is confused about Drishti’s pregnancy. Meanwhile, Drishti recalls her vision and thinks about how her mother can die in the cave before giving birth to them.

She deduces that Laal Chakor wants to change the past. Elsewhere, Pishachini informs Laal Chakor that Drishti is pregnant.

The written episode of Divya Drishti upcoming update: Divya and Drishti learn that Pishachini is planning to change the past.