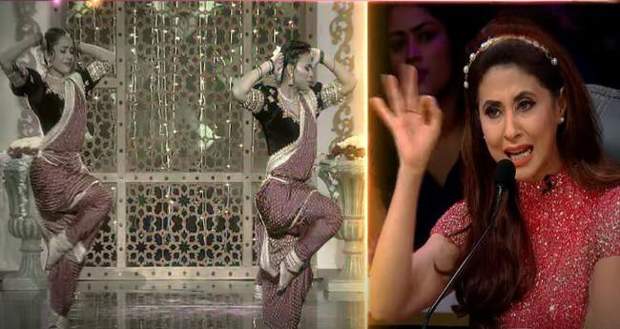 Today’s DID Super Moms 3 18 September 2022 episode starts with Bosco Martis and his Rockstar Gang movie actors with Bosco’s Mom making a gorgeous entry to the stage.

After that, Supermom Sadhana and Skipper Bharat give an amazing puppet-style aerial performance.

After the performance, the judges praise sadhana for her flexibility.

Meanwhile arriving on the stage, Alpana urges Bosco to dance with all the Supermoms and Bosco agrees.

Further, Supermom Varsha and Skipper Vartika surprise the judges with their freestyle dance on the Zara Touch Me song.

Once the performance ends, Varsha and Vratika get the golden buzzer along with Urmila’s iconic dhol play.

Later, Supermom Alpana and Skipper Vaibhav stun the judges with their classical dance on the Dhoom Tana song.

Once the performance ends, Remo informs everyone how he sent Alpana and her husband to a famous studio so they can do a photoshoot together.

Afterward, Supermom Anila and Skipper Shweta play with their dress colors through their Kathak dance on the Naino Se Naino Ko Mila song and get the golden buzzer for it.

Anila then shows a video of her husband helping the audience and asking them to vote for Anila in return.

Further, Supermom Sadika and Skipper Vivek give a soulful Sufi performance on Bhar Do jholi song.

After the dance performance, Sadika shows a video of her in-laws going around in the locality to ask people to vote for Sadika.

After that, Bosco’s team launch their movie song Lauri on the DID set through their dance.

Afterward, Supermom Riddhi and Skipper Shaym impress everyone with their comic dance.

Further, Remo announces that all six Supermoms are selected for the grand finale.

Zee TV’s reality show DID Super Moms has headed for the finale week with the selection of the top 5 contestants as the finalists.

In the semi-finale week, the supermoms will entertain the audience with their power-packed, and exciting performances with their skippers.

The recent promo for season 3 DID Super Mom (18-09-2022) for this weekend shows Supermoms giving “Guru Dakshina” to their Skippers which means paying them off by cleaning their feet.

Seeing this, Vaibhav tells everyone that he has already started asking moms about their dreams so he can fulfill them.

One of the other promos for DID Super Moms (18 September 2022) shows Supermom Anila with Skipper Shweta giving a fantastic performance of the Marathi folk dance "Lavni", impressing everyone.

After the performance ends, the judges also come to the stage to perform Lavni and enjoy themselves.

© Copyright serialsindia.com, 2018, 2019, 2020. All Rights Reserved. Unauthorized use and/or duplication of this material without written permission from serialsindia.com is strictly prohibited.
Cached Saved on: Wednesday 1st of February 2023 06:11:55 PM