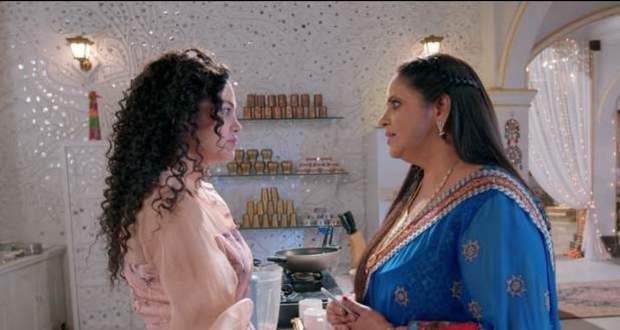 In the forthcoming episodes of YRHPK serial, Meenakshi will threaten Kuhu of breaking the deal as she will misbehave with Mishti.

So far in Yeh Rishtey Hai Pyaar Ke story, Kuhu is a surrogate for Mishti and Abir's child where everyone thinks it is out of Kuhu's maturity but actually, it is due to her own personal reasons.

She and Meenakshi had struck a deal to give Meenakshi an heir and in return, she will give Kuhu her share of business and property. Moreover, Kuhu is trying to become heroin by spoiling Mishti's good image.

Now as per the spoilers of Yeh Rishtey H Pyaar Ke serial, Meenakshi will come to know about Kuhu's intentions and will threaten her to break the deal.

She will tell Kuhu to be in her limits while at the same time, Abir will overhear their conversation according to the gossip twist of Yeh Rishtey Hain Pyaar K serial.

Let's what will be Abir's reaction in the next episode of the YRHPK serial.

© Copyright serialsindia.com, 2018, 2019, 2020. All Rights Reserved. Unauthorized use and/or duplication of this material without written permission from serialsindia.com is strictly prohibited.
Cached Saved on: Saturday 2nd of July 2022 01:05:24 PM