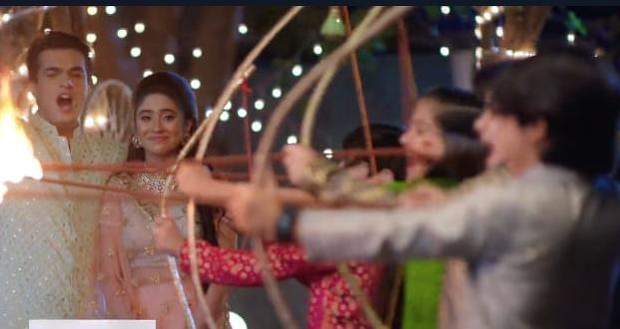 In the forthcoming episodes of YRKKH serial, the kids will apologize to the family after which Kartik-Naira will let them celebrate Dussehra.

So far in Yeh Rishta Kya Kehlata Hai story, Naira and Kartik brought back Kairav and Akshara after which they scolded Kairav and decided to punish his.

However, Krishna took the blame on herself to save Kairav after which all the four kids were punished by Kartik and Naira.

Now as per future twists of YRKKH serial, the kids will make a list of their mistakes and will give it Kartik-Naira after apologizing to them for their dangerous mistake.

Later, Kartik and Naira will forgive all four kids after which the kids will celebrate Dussehra by shooting a lot of arrows at the mannequin of Ravan.

Further, the list of mistakes will also burn with the mannequin according to the spoiler news of Yeh Rishta Kya Kehlata Hai.

Let’s see if Kairav accepts Krishna or not in the future episodes of Yeh Rishta Kya Kehlata Hai serial.

© Copyright serialsindia.com, 2018, 2019, 2020. All Rights Reserved. Unauthorized use and/or duplication of this material without written permission from serialsindia.com is strictly prohibited.
Cached Saved on: Tuesday 29th of November 2022 11:07:06 PM