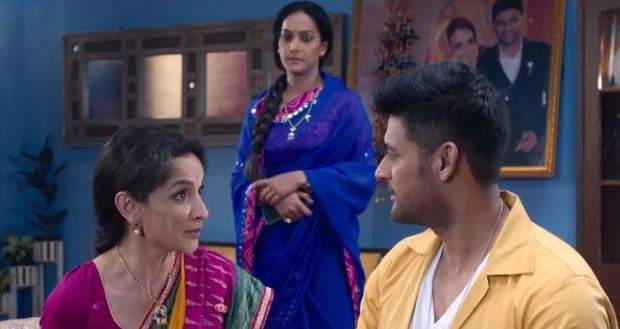 Shaadi Mubarak Gossip: K.T and Kusum to team up together

In the upcoming episodes of Star Plus’s serial Shadi Mubarak, K.T and Kusum will team up to make Preeti confident about her complexion.

Up until now in Shaadi Mubarak, K.T decided to dissolve his partnership deed with Preeti. Meanwhile, Mrs Gopalani insulted Preeti for coming in front of her rich friends.

Now based on the serial gossips of Shadi Mubarak, K.T will get angry with Preeti for breaking her condition of not going to Mrs Gopalani’s house. He will taunt her to cooperate with the client even if the client is not comfortable with her complexion.

Preeti will be furious and will try to make K.T realize that complexion doesn’t show the real feelings of a person.

Meanwhile, Kusum will reveal to Preeti that she and K.T teamed up to make her realize her worth according to the latest update of Shadi Mubarak serial.

Let’s see how Preeti will react to K.T and Kusum’s plan in the future story of Shadi Mubarak serial.

© Copyright serialsindia.com, 2018, 2019, 2020. All Rights Reserved. Unauthorized use and/or duplication of this material without written permission from serialsindia.com is strictly prohibited.
Cached Saved on: Monday 6th of February 2023 06:02:42 AM