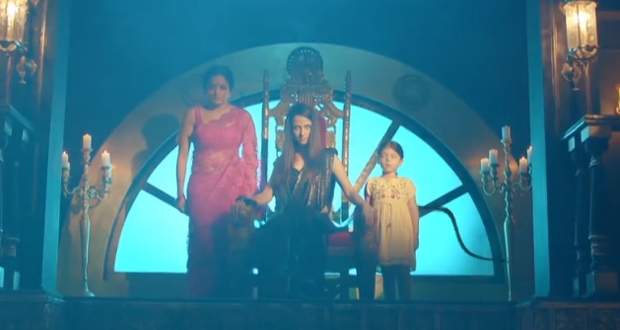 Nazar Serial Spoilers: Rathods to get trapped in Prathmayan’s ploy

In the future episodes of Nazar serial, Prathmayan will create an evil ploy against the Rathods and will try to kill them all during the Dussehra festival.

So far in Najar story, a creature came out of the egg which later turned into Pratimayan. She is the first Ekaayan and possesses immense powers.

Meanwhile, Ansh and Piya are worried about their daughter and are trying to deduce Prathmayan’s plan.

Now as per the spoiler news of Nazar, Nishant and Saavi along with the Rathod family will get ready to attack the Pratimyan.

They will also eat the Mantras from the Daayan Rahasya book to save themselves from the effect of Pratimayan’s control. Meanwhile, Pratimayan will be aware of Rathod's never give up nature.

She will be ready with a trap for the Rathods and the Reevavanshis to kill them for her own benefit. She will plan on ruling the world with other black powers according to the gossips of Nazar serial.

© Copyright serialsindia.com, 2018, 2019, 2020. All Rights Reserved. Unauthorized use and/or duplication of this material without written permission from serialsindia.com is strictly prohibited.
Cached Saved on: Tuesday 24th of May 2022 11:17:38 AM