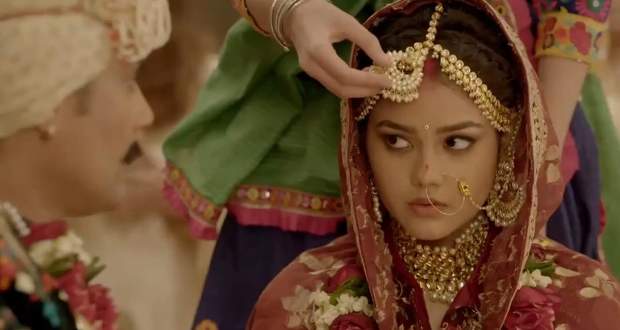 Molkki Latest Story: Purvi to find out that Virendra Pratap is her groom

In the forthcoming episodes of Molkki serial, Purvi will agree to the marriage and will be shocked to find Virendra as her groom in the mandap.

Up until now in Molkki serial, Purvi has agreed to marry a boy of his father's choice while he has set her up for a Molkki marriage without her knowledge.

Meanwhile, Virendra Pratap has agreed to marry a second time as per his Mama's request in exchange for the land where Sakshi mill is built.

Now as per the gossip twists of Molkki, Purvi will agree to the marriage without knowing who the actual groom is due to a misunderstanding.

Afterwards, she will get shocked to find Virendra Pratap as the groom in mandap according to the recent news of Molkki.

Let's if Virendra is also shocked to find Purvi as his bride in the future episodes of Molkki serial.

© Copyright serialsindia.com, 2018, 2019, 2020. All Rights Reserved. Unauthorized use and/or duplication of this material without written permission from serialsindia.com is strictly prohibited.
Cached Saved on: Saturday 26th of November 2022 09:18:22 PM