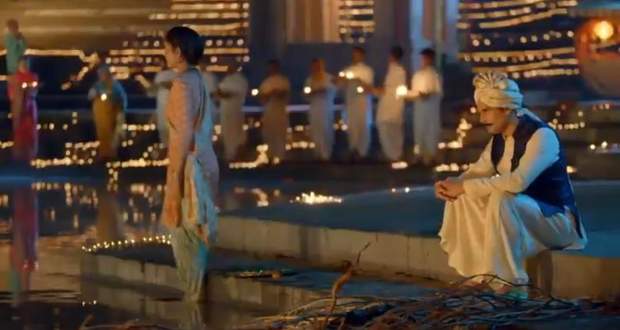 Molkki Future Story: Virendra to jump in the river to save Purvi from drowning

In the forthcoming episodes of Colors TV's Molkki serial, Virendra will jump into the river near the temple to save Purvi from drowning.

Up until now in Molkki serial, Virendra has agreed to marry a second time after his uncle had a cardiac attack in exchange for the property where Shakshi mill is constructed.

Meanwhile, Purvi's preparations for marriage with Vipul has been stopped due to his father asking for dowry while Purvi's father has told Kanji Bhai to fix her a Molkki wedding.

Now as per the gossip twists of Molkki serial, Purvi will be sitting at the stairs near the river where Virendra will also be present.

Further, she will slip and fall into the river after which he will jump in to save her.

Meanwhile, Virendra's Uncle will select Purvi for Virendra's marriage saying that she has all the qualities to become a 'Mukhyani' according to the spoiler news of Molkki serial.

Let's see if Purvi agrees to her marriage with Virendra or not in the future episodes of Molkki serial.

© Copyright serialsindia.com, 2018, 2019, 2020. All Rights Reserved. Unauthorized use and/or duplication of this material without written permission from serialsindia.com is strictly prohibited.
Cached Saved on: Saturday 28th of January 2023 12:34:00 PM