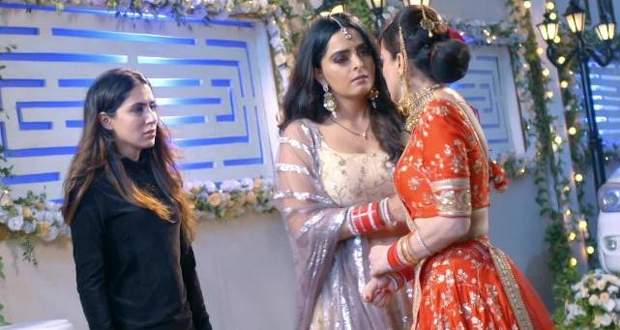 In the upcoming episodes of the Kundali Bhagya serial, Preeta will play a smart trick with Mahira and Sherlyn ruining their plan to spoil her first Rasoi.

Up until now in the Kundaly Bhagya story, Preeta claimed her rights as legal wife of Karan Luthra. Later, Mahira and Sherlyn decide to plot against Preeta but Preeta has decided not to fall prey to their foul plays.

Now according to the spoiler twists of Kundly Bhagya serial, Sarla will advise Preeta to prepare sweet for her family as it's her first Rasoi. Later, Mahira and Sherlyn will plan to spoil Preeta's Rasoi.

Mahira and Sherlyn will also prepare the same Halwa as Preeta is preparing. Later, they will add red chili powder in Preeta's Halwa to ruin her Rasoi. But Preeta will know it and she will trick Mahira and Sherlyn by adding salt in their Halwa as per gossip news of Kundaly Bhagya serial.

© Copyright serialsindia.com, 2018, 2019, 2020. All Rights Reserved. Unauthorized use and/or duplication of this material without written permission from serialsindia.com is strictly prohibited.
Cached Saved on: Thursday 28th of October 2021 10:02:54 AM