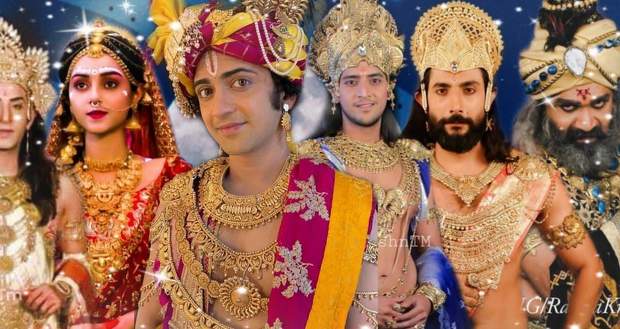 Radha Krishna Latest Spoiler: Pandavs to lose in the game of Chausar

In the forthcoming episodes of the Radha Krishn serial, Pandavs will lose Draupadi to Kauravs in the gambling round leading to Draupadi's Vastraharan.

Up until now in Radha Krishna serial, Paundrak paid for his evil deeds at cost of his life as Krishna killed him with Sudarshan Chakra. Later, Shishupal was also killed and Bheem reunited with his son Ghatotkach.

Now according to the spoiler news of RadhaKrishna serial, Kauravs will invite Pandavs for the game of Chausar i.e gambling game with dice. Pandavs will lose everything including their kingdom and Draupadi.

The Kauravs will humiliate Draupadi in front of the whole sabha and Dushasan will attack Draupadi's honors leading to Vastraharan but Krishna will save Draupadi from the humiliation. Draupadi's Vastraharan will mark the beginning of the epic Mahabharata war as per gossip updates of RadhaKrishn serial.

Let's see what happens next in the future story of Radha Krishna serial.