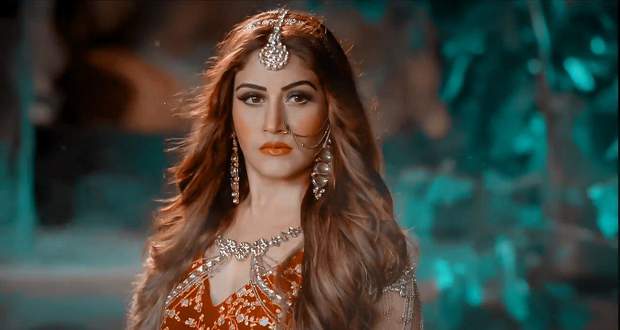 Naagin 5 Future Story: Bani to use Teer's body against Veer

In the upcoming episodes of Colors TV’s serial Nagin 5, Bani will use Teer's dead boy against Veer and will take it out in the moonlight.

Up until now in Naagin 5, Bani and Veer married each other to take revenge. Later, Jai reached Singhaniya mansion and assured Bani that he will always support her. Later, Mayuri used Naagfani to make Veer dangerous so that he would kill Bani in his anger.

Now as per the recent story twists of Naagin 5, Bani will intentionally take Teer’s dead body outside in the moonlight so that Veer will get angry and will attack her first. Meanwhile, Mayuri will be all set to attack Bani with a special arrow hiding behind the tree.

Jai will also further reach the same place and Bani will be surrounded by her enemies according to the latest gossip of Naagin 5 serial.

Let’s see what's next in the upcoming story of Naagin 5 future episodes.

© Copyright serialsindia.com, 2018, 2019, 2020. All Rights Reserved. Unauthorized use and/or duplication of this material without written permission from serialsindia.com is strictly prohibited.
Cached Saved on: Wednesday 30th of November 2022 05:23:22 PMCached Disp on: Sunday 4th of December 2022 08:40:04 AM