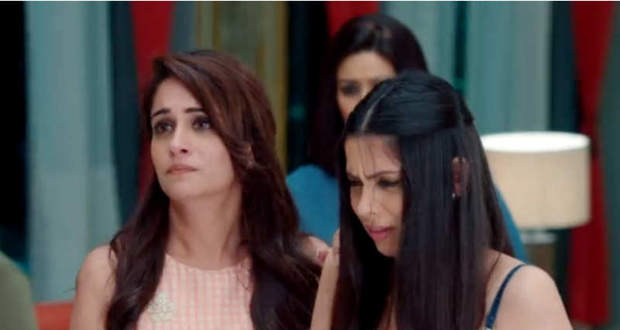 In the forthcoming episodes of Kahan Hum Kahan Tum serial, a new twist of Pooja and Rohan’s extra-marital affair will bring a full stop on Sonakshi and Rohit’s budding chemistry.

In the present story of KHKT serial, Sonakshi and Rohit returned their homes safely with the blessings of Bappa.

Later, Rohit also surprised Sonakshi with Dhols in the Ganpati Visarjan. They all enjoyed while Sonakshi and Rohit shared some romantic moments.

Meanwhile, Rohan and Pooja are also having a secret affair.

Now as per the gossip news of Kahaan Hum serial, the Sippy family will learn about Rohan and Pooja’s relation and will get infuriated as Rohan is already married.

Innocent Pooja will also feel betrayed upon learning the truth of Rohan’s wife Tanya and will tell everything to Sonakshi.

Sonakshi will eventually blame Rohit for his brother’s mistake and will end her own love relationship with him according to the spoiler updates of Kahan Hum Kahaan Tum serial.

© Copyright serialsindia.com, 2018, 2019, 2020. All Rights Reserved. Unauthorized use and/or duplication of this material without written permission from serialsindia.com is strictly prohibited.
Cached Saved on: Wednesday 30th of November 2022 08:47:16 PMCached Disp on: Sunday 4th of December 2022 07:18:43 AM